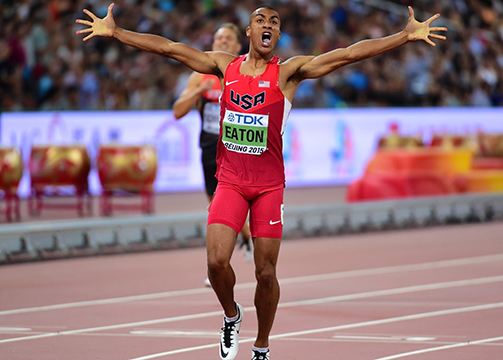 PORTLAND – To nobody’s surprise, Team Eaton has accepted official invitations from the IAAF to compete in the combined events at the IAAF World Indoor Championships Portland 2016.

Ashton Eaton, the world-record holder in the indoor heptathlon with 6,645 points, will take aim at his third consecutive World Indoor championship in that event after winning gold medals in the past two meets in Istanbul (2012) and Sopot (2014).

Eaton, who was born in Portland, grew up in Central Oregon, and graduated from the University of Oregon, doesn’t mince words when it comes to his goals for the four-day meet, March 17-20, at the Oregon Convention Center.

“I’ll try to break the world record,” said Eaton, who turns 28 in January. “I will keep my strategy the same. I will try to win, have some fun, and if the world record is there, I’ve got to go for it.”

Eaton competes for Oregon Track Club Elite in Eugene and is coached by Harry Marra. He was recently named 2015 Men’s Athlete of the Year by Track & Field News magazine after breaking his own world record in the decathlon (9,045 points) at the 2015 IAAF World Championships in Beijing.

Indoors, Eaton has not lost a heptathlon competition since he placed sixth at the 2008 NCAA Indoor Championships in Arkansas as a sophomore at Oregon, a span of nearly eight years.

“I’m excited,” said Theisen-Eaton, who is also a University of Oregon alum. “I do feel like this will be my home track, and I’m excited because my family gets to come. Nobody in my family has ever seen me compete at a professional indoor meet.”

Oregon Track Club Elite’s Brianne Theisen-Eaton will compete in the pentathlon on March 18 at the 2016 IAAF World Indoor Championships at the Oregon Convention Center in Portland. (TrackTown Photo by Phil Johnson)

Theisen-Eaton, who turned 27 in December, is a three-time NCAA champion and the Canadian record-holder in the pentathlon.

The heptathlon includes seven events and will be contested across two days: 60m, long jump, shot put and high jump on Friday and 60m hurdles, pole vault and 1,000m on Saturday.

The men’s heptathlon and women’s pentathlon fields at World Indoors will both include 12 athletes invited by the IAAF based on their performances and world rankings in 2015 and ’16.

Scroll back to top